Ministers Reflection on Harvest and Living in Harmony with Nature:

Chapel member, Anne Marie Walsh recently lent me a DVD of ‘The Biggest Little Farm’ – which so inspired me I based my Harvest service around it last Sunday. It documents the true story of John and Molly Chester who left the city of Los Angeles for a new life in the country. In April 2011, they arrived at Apricot Lane Farm in S. California, with the intention of creating a farm in harmony with nature. John, a director-cinematographer specialising in wildlife photography, and Molly a chef and food blogger –had a dream – to rediscover traditional farming methods, as opposed to the large-scale, pesticide-intensive agriculture which ravishes the land. The 200 acres at Apricot Lane had been used for monoculture – avocado and lemon trees. Chemical spray had killed off most of the biodiversity and this together with severe drought had left the soil rock hard and dead.  With the help of biodynamic farming guru Alan York, the couple slowly bring the soil back to life. The film documents their successes and failures, and their dogged perseverance as they attempt to plant 10,000 orchard trees and 200 different crops, as well as raising chickens, ducks, sheep, cows and pigs.  The traditional farming methods they use are ‘simple but not easy’. They have to decide whether to go to war with the coyotes when their chickens are killed. Their refusal to use pesticides encourages birds and mammals to return – which in turn damage the fruit crop.  At times, the Chesters are close to despair, but by refusing easy solutions which cost the earth, they eventually find solutions that work with nature. It’s the story of a symbiotic relationship between human, animal and bird; the chickens mow the grass, the dogs guard the chickens, coyotes keep down the gopher population, ducks eat the snails, and animals fertilise the land which yields a bumper crop – sold at market, providing a sustainable income invested back into the land. The film is not always happy ever after. Their guru dies of cancer just when they need him most, they face drought, they escape one wild fire and their farm continues to be at risk from other wildfires (due to climate change). But 10 years on, the couple with a dream have a successful biodiverse farm which has much to teach us about living in harmony with the earth. 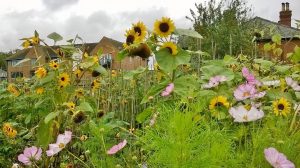 What’s all this got to do with celebrating Harvest? Everything! Implicit in the film is the question about the food that ends up on our plate. Do we choose fruit sprayed with noxious chemicals that harm the soil, wild-life and ourselves – or (if we can afford it) do we pay extra for organic? Do we choose organic meat and poultry from animals free to roam, or hormone anti-biotic injected meat from animals shut up in sheds? Do we source free-range, organic eggs – or eggs from chickens squashed into tiny cages.  When the Chesters arrived with their vision of biodiversity, they were surrounded by mono-culture farms. To the south lay miles of raspberries growing under plastic. To the north, the ruins of the largest indoor hen lying operation in the world. ‘Egg city’ once housed 3.5 million chickens who together laid 2 million eggs a day! Since pagan times, early Autumn has heralded the gathering in of the main crops with feasting and rites of thanksgiving. And with the coming of Christianity – gathering in churches for Harvest festival services.  Harvest festivals continue, but they are no longer central to our lives, and with this loss of annual ritual which binds our society and community together, we have lost sight of our connection to the land. Our ancestors had no doubt about their total reliance on nature. And they worked in harmony with the land – on small holdings and small-scale farms, allotments and patches of garden – using natural methods favoured by the Chesters – companion planting, crop rotation, free-range grazing. In an age before pesticides and factory farms, organic and free-range food were not some middle-class fad – they were the norm!  Our ancestors were in no doubt where the meat on their table – a luxury, not an every-day necessity – came from. With most of our food bought from shops, usually wrapped in plastic – we too often forget our connection to the earth. We forget that eggs come from real chickens, that milk and cheese come from real cows. And we forget that most of our fruit and vegetables are reliant on the bees and insects, whose numbers are in rapid decline – due to the destruction of their habitat and use of pesticides. 75% of our crops rely on pollination from bees and insects – if we lose them, we lose many of the foods we take for granted. 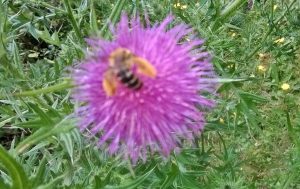 Harvest time in this modern age is surely a wake-up call for us to reflect on and change the way we grow, produce, and buy our food, recognising how our lifestyles abuse the earth.  A good harvest was a matter of life and death for our ancestors; in our time, with the ecological crisis upon us, it’s a matter of life and death for us too – and for future generations. As John Chester says: “If you knew how your food was grown and raises – and given the choice, what would you eat? That is the question the next generation is going to have to answer.” For those of us lucky enough to have sufficient income – as consumers – we have the choice every time we shop, to remember the loaf principles (from Green Christian) and care for the living earth of which we are a part: 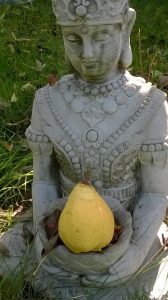 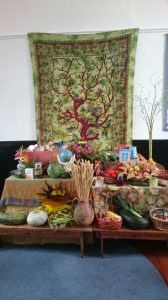 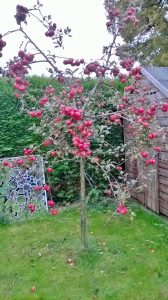