Many of you will be familiar with the novel ‘A Tale of Two Cities’ by Charles Dickens (1859). The plot centres on the years 1775-1793 – exploring the intertwining story of two men, Charles Darnay and Sydney Carton – set in London and Paris, against the backdrop of political unrest leading up to the French Revolution. Confession: I’ve never read the book, but I am familiar with the opening lines which prepares readers for what is to come:

People spoke of that time through the lens of one extreme or the other extreme. Thus has it ever been! These words by Dickens reflect my feelings about 2020. As we look at the year that has past, we see a kaleidoscope of events, experiences and emotions – and everyone has their own opinion about it!

“It was the worst of times”: it’s hard to deny this faced with exhausted medics, all those who have lost loved ones, or had livelihoods decimated by the pandemic. Yet others, attest to 2020 being – if not the best of times – a year of positive change. Some found new ways of earning a living, others kickstarted a relationship, or had more time for reflection. On the environmental front, pollution levels fell and green energy rose to an all-time high – but disposable PPE created a tsunami of plastic waste. The shooting of George Floyd showed racism in plain sight, yet the numbers who marched in Black Lives Matter showed the ground swell for change.

“It was the age of wisdom, it was the age of foolishness”:  Surely we have seen much foolishness in the political arena – in this country and across the pond. The events of 6th Jan 2021, with Trump supporters storming Capitol Hill, resulting in 5 deaths – is a very low point in America’s history. Yet with a new president in the White House and Kamala Harris as the first woman of colour to hold such high office, comes the hope that wisdom will prevail.

“It was the epoch of belief”: in 2020 the number of people googling ‘prayer’ and joining online church services, rocketed – people hungry for spiritual succour in a chaotic world.  “It was the age of Incredulity” – social media swamped with conspiracy theories about Covid-19 and vaccinations, that fly in the face of good sense and science.

“It was the season of light, it was the season of darkness”; surely many of us have felt these polarities within our own psyches – as our mental health takes a battering? Yet the light of human resilience and kindness still shines.

“It was Spring of Hope”: remember the resolve of the first lockdown – a sense of ‘we’ll get through this together’ – buoyed by mild weather and spring blossoms. Followed by “the Winter of despair” – Christmas plans thrown into disarray, a sharp rise in deaths, many people battle weary.

“We had everything before us: we had nothing before us”; perhaps reflecting the feelings of Brexiters versus Remainers, as we finally left the E.U? Some predict there is little to look forward to. Others see the opportunities that arrive with every crisis. 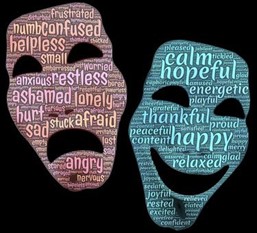 All these opposites seem true about the times we have lived through – and will continue to live through in 2021. Tragedy and beauty, moments of terror and solace, wisdom and folly, hope and despair, the best and worst of humanity…. Can we embrace the whole of it?  Perhaps the safest path is to tolerate ambiguity and walk the ‘middle way’ between extremes. We live in a world where dark and light make up the whole. We can choose to focus on the positives, whilst staying mindful of the shadow aspects – guided by the words of William Blake:

Perhaps the only way to stay sane in such times of change is to leave the door open to possibility. To concede that something good will yet come from the social upheaval we are witnessing. Whilst we enter the new year with so many uncertainties – there are some certainties we can hold fast to: that to be alive is a blessing, that love is the highest meaning, that human kindness is the better way, that beauty and goodness exists; that however dark the night, the sun will rise tomorrow. Such moments of ‘gnosis’ – deep knowing – provide an anchor amidst the swirl of flux and change.

In his poem “Thanks, Robert Frost” David Ray writes:

Do you have hope for the future?
someone asked Robert Frost, toward the end.
Yes, and even for the past, he replied,
that it will turn out to have been all right
for what it was, something we can accept,
mistakes made by the selves we had to be,