Today is Palm Sunday, in the Christian calendar the start of Holy week, when we recall the story of Jesus of Nazareth entering Jerusalem on a donkey – his last fateful ride – cheered by the crowds, hailed as a king – yet ultimately leading to his death. Yesterday evening saw the start of the Jewish festival of Passover.  In the Palm Sunday story Jesus enters Jerusalem for the very purpose of celebrating Passover with his disciples. These stories from Jewish and Christian tradition may not be factually true, but they contain universal truths – which tell us something about captivity and freedom, fear and courage – and can help us make sense of our own stories and these times we are living through.  Passover – a spring festival, like Easter – is a moveable feast. It lasts eight days and recounts the story of the Hebrews’ escape from slavery in Egypt – as told in the book of Exodus in the Hebrew Bible. Moses is called by Yahweh to deliver his people from slavery, and nine ‘plagues’ are   unleashed (including frogs, boils, locusts and hail!) to try to force Pharoah to let the Hebrews go. After each calamity Pharoah relents, but then changes his mind…. Until the terrible night of the tenth plague, when ‘the angel of death’ passes over – killing all the first-born children and animals of the Egyptians. The Hebrews are spared – having followed the command to put the blood of an animal on their door posts.  Wherever the angel sees the blood, he passes over. It is in some ways a shocking story to modern ears, but after a year of ‘plague’ – the ‘angel of death’ having visited many households – indiscriminately it seems – is sadly all too familiar. 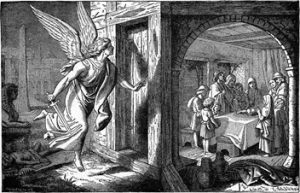 On that memorable night the Hebrew people are prepared – having gathered their belongings, they hastily eat their last meal in captivity and take with them unleavened bread (no time to wait for bread to rise!) After the miraculous crossing at the Red Sea, they flee with Moses into the wilderness – where many trials will befall them.  Each year on the 1st night (and sometimes second night) of Passover, Jewish people re-enact this story – taking part in the Seder – a ritual feast that includes the eating of bitter herbs and unleavened bread – in memory of their ancestors’ flight from captivity. Some Christian and Unitarian congregations also hold Seder meals at Passover. I’ve taken part in several such meals and have been moved by the shared rituals, which whilst rooted in Jewish tradition, seem to transcend any one faith. The Passover meal is a chance to give thanks for liberation, to remember all those who are oppressed, and to recommit to a vision of the ‘Promised Land’ for all.

Whilst the stories of Passover and Palm Sunday may seem very different to each other, in some ways they are dealing with a common theme: what price freedom? The journey towards freedom, was fraught with many dangers for the Hebrew people on leaving Egypt. And yet that yearning to live in their own land, free to practice their own religion and customs – compelled them to take the journey with all its risks and hardships. And of course, there are many in our world today, likewise compelled to take that risk. Think of the 1000’s of refugees who leave their homeland, because of conflict, violence, oppression, or hardship – seeking a better world – the promised land – only to find themselves in a god-forsaken refugee camp – or stranded in no-man’s land; those who risk their lives to cross the oceans in overcrowded boats – many who will never reach dry land; and those who are crossing the Mexican border on foot with young children – seeking a better life in the United States. Whatever our politics, surely we are moved by compassion when we see the terrible lengths that people will go to, in seeking a better life? How many actually reach their ‘Promised Land’? Yet for the lucky few who do, how precious the freedom, after the hardships of the journey. At Passover, we are called to remember all those who wander still, in search of a home-land – and surely we are called to do more as a country and as citizens, to welcome the refugee and stranger into our land of relative plenty. 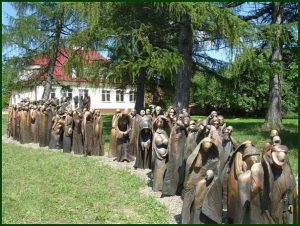 ‘Exodus’ Wola Sękowa 8 June 2007                                                                                                                                     Most of us are fortunate indeed, that we are not compelled by circumstance to leave our comfortable homes and journey into unknown lands. Yet many of us at some point in our lives,  will be called to take such a journey, on an inner level at least;  those times when we summon up the courage  to free ourselves from habits, attitudes or lifestyles that enslave us. Taking that first step can be terrifying – whether moving on from a relationship, or job, or making some other significant change – the journey to where we want to go, takes courage and is rarely linear. Collectively – this past year of lockdown has seemed like a form of enslavement to many. We look to the day of our ‘release’ and hope for a better future. Yet this promised land of freedom will not come easily or immediately. I’m not just talking about the way out of lockdown, but the rebuilding of our communities. It’s predicted that in this country alone, we face at least a decade of socio-political upheaval. And this will surely be played out globally. Like it or not, we won’t leave lockdown and enter the promised land immediately. Human nature being what it is, there will be much grumbling – just as we are told the Israelites complained and grumbled as they wandered through the wilderness. Some of us may even prefer the ‘captivity’ of lockdown, with its securities, to the no-man’s land we may find ourselves in; just as they yearned for the familiarity of Egypt they had left behind.  I hope it won’t take us 40 years – the time it took them to reach ‘the land flowing with milk and honey’ – or in our case to ’build back better’!  We can be hopeful and optimistic, yet the reality is we will face obstacles and uncertainties in the months and years ahead. We do well to prepare for this time in the ‘wilderness’ – where we’ve left behind the world we knew and are moving towards a future still in the making. Just as in the Exodus story, many of the Hebrews who set out from Egypt, died in the wilderness – it was left to their children to enter the Promised Land – just so, even if we do not live to see the world of our dreams come to fruition, we can hope and pray that our children and their children will. 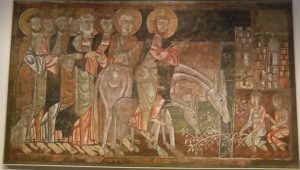 And consider the shorter journey of Jesus into Jerusalem. We don’t know the facts, yet the Gospel stories suggest he went into the city knowing he was walking right into the hands of the religious and political powers who wanted him dead. It seems a reversal of the Passover story; that journey led the people out of captivity towards freedom. The short journey on a donkey takes Jesus from freedom towards captivity. The same people who praise and hail him as king, quickly turn against him – that’s how fickle humans are. Perhaps we can relate to this in our own lives? Celebrities and those in the public eye, know how easy it is to fall off the pedestal on which they’ve been placed!  Jesus follows in the footsteps of the prophets and all those who follow the convictions of what they know to be true – even at cost to themselves. Yet though his journey took him from freedom to imprisonment and death – you could say that it is only in following the path of the heart, that true freedom can be found. Jesus refused to be held captive by the traditions of the religious leaders, or in thrall to the political powers of his time. The ‘kin-dom’ of peace and justice he envisioned, mattered so much, he was prepared to go to his death in trying to realise it. Despite the fear he must have felt – surely he also knew that true freedom of heart and soul comes from being faithful to one’s calling – and that those who live enslaved to religious bigotry, political oppression or fear of taking action, can never really be free? We will hopefully not be put in prison (or go to our deaths!) for the causes we believe in, yet we may at times have to make the difficult choice that Jesus made; do we stay mentally imprisoned because of fear, or do we live out our values and convictions, even at risk of being misunderstood or denigrated? In the Exodus story – not all the Israelites reached the promised land of freedom – but at least they started out. Jesus seemingly did not realise the Kingdom of Heaven on earth either – yet his death gave rise to a spiritual movement that changed the course of history.

In our own journeys towards freedom of heart, mind and conscience, there will be times when we will be lauded and times we will be criticised; there will be days of joy and days of fear, moments of faith and moments doubt…  As we all take the long journey out of lockdown, as some of us start again after nights of loss and grief, as we follow the convictions of our hearts – we may feel scared as well as elated – just as the Hebrews were on leaving Egypt, just as we imagine Jesus was entering Jerusalem. We may not live to see the ‘Promised Land’ but it is the way that we journey, rather than the destination, that truly matters.  One Jewish legend says that even after Moses said words to part the Red Sea, the waters did not recede until the first Hebrew placed a foot in the water. In other words, we have to take the first step towards freedom, before the path opens up before us.  And in all this we can learn from those who have gone before – our spiritual ancestors can show us what it means to walk forward in courage, into an unknown future. 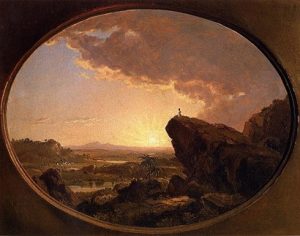 All images from commons wikimedia