I start with a story: Once upon a time, a poor man discovered a folded piece of parchment slipped between the pages of an ancient volume. The writing was tiny, the ink faded – but he could just make out these words: “On the shores of the Black Sea, there is a pebble which will turn everything it touches into gold. This magic pebble looks like every other pebble, but there is a difference: while all the other pebbles feel cold, the magic pebble feels hot.” The man was overjoyed: `Imagine – a pebble which turns everything it touches to gold!’ He sold the little he owned, and set off to the Black Sea to find the magic pebble and make his fortune. The shore was covered with millions of almost identical pebbles, but he set about with enthusiasm. From dawn to dusk he spent his time picking up pebbles. If a pebble was cold, to make sure he didn’t pick up the same one twice, he threw it into the sea. Day after day, week after week, month after month – as the seasons turned, as the sun travelled the sky, as tides ebbed and flowed, as birds wheeled above him – the man barely noticed his surroundings – so intent was he on finding the magic pebble. Lift a pebble – feel its temperature – throw it into the sea…. Lift a pebble – feel its temperature – throw it into the sea….    Then one evening, just as he was about to stop for the night, he picked up a pebble. It was hot to the touch! But through sheer force of habit the man threw the pebble into the Black Sea! One MINDLESS moment! 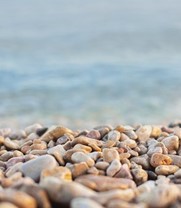 Another story : A man was out walking along a coastal path, when a hungry tiger suddenly came bounding towards him. The man ran as fast as he could, but with the tiger almost upon him, he had no option but to throw himself over the cliff to escape the salivating jaws! Fortunately, he was able to grab hold of a thick vine trailing down the cliff side. It was a long drop to the beach below, but a broken ankle was a small price to pay for his life, so he decided to jump. But then he heard a growl. Looking down, he saw another tiger looking up at him!  Above a tiger, below a tiger – both wanting a meal! What could he do? `Perhaps one of them will get tired of waiting, if I can just hang on’ the man thought. But then two mice appeared from a hole in the cliff and began to gnaw the vine! The poor man knew it would not be long before they had chewed through and he would fall into the waiting jaws of the tiger. With his life flashing before him – as he thought of all the joys he would leave behind, and all the joys he would never experience – a beautiful thing caught his attention. Near his right hand was a big, juicy, wild strawberry. Never had a strawberry seemed so red.  Holding onto the vine with his left hand, he picked the strawberry with his right hand and popped it into his mouth.  It was the most delicious, succulent, juicy, sweet strawberry he had ever eaten in his whole life… and in that moment, the fate that awaited him was entirely forgotten. One MINDFUL moment!  (As to what happened to the man – I have no idea…)

Mindfulness has become the ‘in thing’ in recent years – books, articles, apps – recommended by the NHS, used in business, endorsed by celebrities… But mindfulness as a concept is ancient. The Buddha, when asked, “what makes a person holy?” is said to have replied “every hour is divided into a certain number of seconds, and every second into a certain number of fractions. Anyone who is able to be totally present in each fraction of a second is holy“. Based on this definition, I have a very long way to go in the holiness stakes! Contemporary teacher, Jon Kabat Zinn, defines mindfulness, ‘as paying attention on purpose, in the present moment, nonjudgmentally.” It sounds simple – but it’s not easy. After years of weekly meditation in the Chapel and mindfulness courses – despite knowing the proven benefits – I still struggle with staying in the present moment, my ‘monkey mind’ distracted by a myriad of convoluted thoughts. I get impatient by videos showing teachers with beatific grins sitting in lotus position, dispensing mindful wisdom; I want to protest, “that’s all very well but…” Yet I know that ‘mindfulness’ is not some faddish trend or mystical state for the chosen few, but something accessible to everyone. Living mindfully is about fully embracing the whole of life; giving full attention to whatever we’re doing – whether walking, eating, washing up, driving, on the computer… not just when we’re chilling, but when we’ve on the ‘go’. In today’s world, when so many feel compelled to multi-task, Zoom has added a whole new temptation. A couple of weeks back I managed to Zoom through our Unitarian Annual General Meetings (and vote!) whilst finishing off my Sunday service. I doubt I’m the only one! Jon Kabbat Zinn reminds us that the word for modern humans is ‘Homo sapien sapiens’ – which can be translated as ‘the species that is aware, and knows it is aware.’ But are we really? Maybe a better name for 21st century humans would be ‘homo distractus’! In a wired up 24 /7 society, with a surfeit of distractions, it’s not surprising many of us struggle to stay fully present to our lived experience, in the here and now…

Living in the present moment doesn’t mean we do nothing to plan for a better future for ourselves and others, but it does means we don’t put our life on hold along the way. This past year, for many there’s the sense of life being ‘on hold’ as we endure the long weariness of ‘now’ and want to press fast forward: “When the pandemic is over, then I’ll relax…” “Once lockdown eases then we can start living again”…. In different ways we are holding our breath… until things return to ‘normal’… until we can go on holiday…. or all return to the Chapel… But the truth is, we don’t know exactly when this pandemic will be over. We may have to adjust to a new normal, so the secret is surely to start living as fully as we can – even whilst masked and socially distanced – with all the frustrations and restrictions…

In Hebrew scripture in the book of Exodus, the Israelites having escaped from Egypt wander in the wilderness and cry out for food. God sends ‘manna’ from heaven. They wake up to a white substance on the ground that tastes like honey and wafers. Each person is instructed to gather only as much as they can eat that day. Those who disobey find that manna stored overnight is full of worms – inedible. It’s a great story about living one day at a time, trusting we’ll receive what we need tomorrow. Christians on pilgrimage in the Middle-Ages used a scallop shell as a bowl. Knocking on doors, they received as much food as would fit in the shell – one meal at a time. One of the first monastic principles after the Buddha’s death, was that monks could not keep food overnight. Each morning the monks went around the village with their bowl; whatever was given – was enough for that day.

‘One day at a time’ is the motto for AA – Alcoholics Anonymous; the focus is getting through one day without a drink. When I worked with severely depressed patients, the focus was not on how to get through another month or week – but what can we do to make this day, this hour more bearable? One day at a time is sound psychological advice. In the Gospels we read those timeless words about the lilies of the field, “…do not worry about tomorrow, for tomorrow will bring worries of its own. Today’s trouble is enough for today.” It seems to be human nature to try and second guess tomorrow. But if we really could see into the future – would it help?  With 6 month’s warning on Covid 19 we could have had a head-start on the Zoom tech… maybe squeezed in more trips…spent more time with friends and family beforehand? Nationally, the government could have done more to prepare – perhaps less people would have died? But think back to other difficult times in life – perhaps the loss of a job or a relationship. Would we still take risks and invest time and energy, if we knew our plans would unravel, or love end in heart-ache? If forewarned, we’d taken a different path, we might have saved ourselves pain, but also been deprived of the positives – and perhaps the very struggles we needed to grow? There’s wisdom in the classic song – ‘Que Sera Sera, whatever will be, will be, the future’s not ours to see, Que Sera Sera’

As well as second guessing the future, it’s human nature to cling to the past… during Covid, looking back nostalgically to how much simpler life was before. Sometimes escaping to the past or future makes sense as a coping strategy. Studies show that people cope best in solitary confinement by rebuilding in detail happy memories from the past or imagining better times to come. Those facing extreme physical or mental pain, understandably want to escape the ‘here and now’. Focussing on a brighter future, or happy memories may be the only means of enduring an unbearable now. And in more ordinary times, it can lift our mood to take trips down sweet memory lane or envision a brighter tomorrow. But constantly living in the past or future, can be a prison. Research suggests the average person spends nearly half their time thinking about something other than what they’re doing – and that too much reminiscing or day dreaming makes people miserable.  This confirms what spiritual teachers of old taught. That a life well lived, is lived in the NOW – one day at a time – with all its riches and sorrows, joys and challenges. If we are wise, we will build our home in the present moment – open to the wonder and mystery of being alive, which unfolds in every minute, every second, every breath.       As the poet R.S Thomas reminds us in ‘The Bright Field’:

“…Life is not hurrying on to a receding future, nor hankering after an imagined past. It is turning saide like Moses to the miracle of the lit bush….”