I’m pleased to say last Sunday’s service – 9th August – the first in the Chapel since lockdown – went well. Whilst it felt a bit surreal standing behind a sneeze screen with those in front of me all masked up; whilst I missed being able to open my lungs and sing; whilst I missed the conversation over tea and biscuits afterwards – it was wonderful to feel once more the homely embrace of the Chapel’s walls, hear the friendly ticking of the clock, see familiar faces in the flesh, and to light real candles (a tip – don’t try to blow out matches with a face mask on!) While I wish everyone who wanted to, could have been there in person, I’ve had positive feedback from those joining on Zoom – apart from a few camera wobbles, the technology served us well.

A big thank you to Adam Baumberg and Robert Oulton for their help with the tech – and to Christine Martin and Christine Hayhurst as Trustees on duty, for keeping us covid safe. Thanks also to Libby Blake who has been planting up, watering and tending the flower-pots in the Chapel garden – and made sure on arrival, we were welcomed by the cheerful sight of geraniums standing guard by the door. We were also treated to a gorgeous display of sunflowers in the Chapel – arranged by Christine Hayhurst – which fitted perfectly my theme of ‘Summer Holy-days’. It’s these little details that make the Chapel space and our return to it, so special. 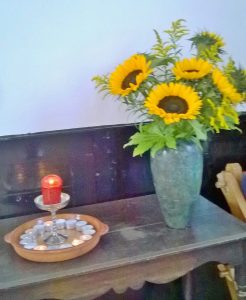 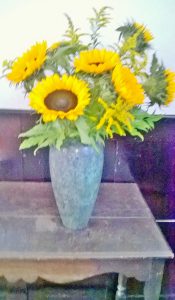 Whilst our trial service in the Chapel was a success, after discussion with the trustees, we’ve agreed to take things slowly in terms of opening up for future services. Because not all service leaders are able to come to the Chapel, because of the limit on numbers, and the extra tech and health & safety requirements of meeting in the Chapel at present – for the rest of the year we will aim to hold one (or two) ‘in situ’ services per month, with Zoom services in between.

Our next service in the Chapel is planned for 13th September. Once again numbers will be limited – with priority given to those unable to access Zoom.  But with Autumn almost upon us, let’s not look to far ahead – and make the most of what’s left of the Summer. Normally by now, Rob and I would have spent a week at the coast, but we like many others, have had to cancel holiday plans in the wake of Covid 19.  Whilst some people with the easing of lockdown are venturing further afield – even abroad – many others will not have a proper vacation this year.

It’s worth noting that we get our word holiday from ‘holy day’. The origins of the word come from the Old English haligdæg ‘holy day’ – meaning a consecrated day, religious anniversary, or sabbath, a day exempt from labour. This is a reminder that we can take time out from the ordinary busyness of our lives and make our days ‘holy’ – by taking sabbath pauses, making space for re-creation – without leaving home.

There’s a story of a Western businessman who hired some scouts from a South American Indian tribe to guide him on his expedition. They walked day after day, until suddenly without warning the guides stopped and sat down. The westerner tried to chivvy them on, but they refused to budge and made camp – explaining they had to stop, to allow their souls chance to catch up with their bodies. So too, we need to stop sometimes, to process life’s many and varied experiences. How true that is in the wake of so much change, with so many norms upturned in the last few months. I for one, need a breathing space to catch up with tumultuous events – and to catch up with myself.

I’m starting 2 weeks leave on Monday 17th August and am planning a retreat from home. With the tent in the garden,  I will make time to ‘stand and stare’ – and notice the joys of nature on my doorstep. As many people are finding amidst the turmoil of our times, this reconnection with nature has the capacity to turn the most ordinary of days into a ‘holy-day.’

And so I hope that however you are spending these August days (whether in baking sun, thunder-storms or flash floods!) that you have some quiet moments to ‘stand and stare’ and ‘turn at beauty’s glance’ (W.H. Davies). And thinking of the sunflowers which graced our Chapel on Sunday, as bold sentinels of courage in difficult times, I offer some words by Helen Mirren:

“I don’t think there’s anything on this planet that more trumpets life than the sunflower. For me that’s because of the reason behind its name. Not because it looks like the sun, but because it follows the sun. During the course of the day, the head tracks the journey of the sun across the sky. A satellite dish for sunshine. Wherever light is, no matter how weak, these flowers will find it. And that’s such an admirable thing. And such a lesson in life.”

Let’s keep our faces turned to the light as the seasons turn,